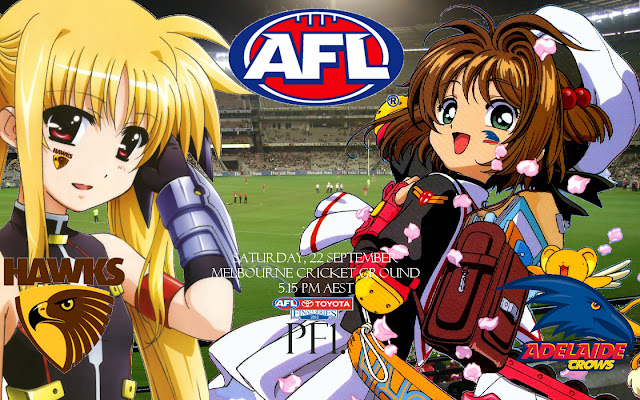 COME AT ME- LANCE FRANKLIN IS PROVIDING ADELAIDE WITH A SERIOUS DILEMMA AHEAD OF THE PRELIMINARY FINAL.HERALD SUN
INJURY-HIT Adelaide will consider throwing a young defender with only two games to his name this year on Hawthorn superstar Lance Franklin in the preliminary final. ADELAIDE MAY LOOK TO DEFENDER LUKE THOMPSON TO STOP HAWTHORN SUPERSTAR LANCE FRANKLIN. GETTY IMAGES
"(Andy) Otten (192cm) is another player who could certainly come back and play on a tall.
The Crows have been rocked by injury, although forward Jared Petrenko is still considered a chance to play despite his tears at the final siren on Friday night after hurting his shoulder.

Daniel Talia is gone and Sam Shaw has done his hamstring, which has left very little in the pantry with Ben Rutten not believed to have the pace to go with Franklin.

"We have lost young Shaw, the options are you have Truck (Rutten) down there and Luke Thompson - a young defender who in his second game I thought played well," Bailey told SEN Radio.

"Because we've lost Talia, who is probably our No.1 key defender, we are going to have to mix and match a bit."

The former Melbourne coach said cutting the supply to Franklin will be the best way of stopping Franklin.

"You don't want to leave your backs one on one when you're playing on someone like Buddy," he said.

"You've got to have help somewhere else to come from.

"But we don't want too many blokes behind the ball so we're kicking it back to them, so there is a delicate time of when you can the extra player back."

The good news for Adelaide is Petrenko may be a shock selection against the Hawks, a day after believing his season was over after injuring his shoulder in the final minutes against Fremantle.

"I'm not sure whether it popped out and then popped straight back in," Bailey said.

"After the game he was obviously very disappointed.

"But post-game when he had it taped up and iced up, he seemed to be a little bit more understanding of it.

"So I don't know how bad it is today - those things will probably wait until Monday."

Bailey was hopeful the 22-year-old would get up for the preliminary final.

"Sometimes in those situations when you stretch the ligaments, you can tape it and play," he said.

"He is a seriously tough competitor, so you never know - he might just find a way to turn up next week.

"Right at the end of the game was disappointing for him - that was the shock factor for him."

The Crows won their way through to the preliminary final despite a lower than expected crowd at AAMI Stadium on Friday night.

Over 44,000 attended the qualifying final the previous week, but they could manage only 31,000 against Fremantle.

Higher ticket prices have been cited as a reason, but the AFL said today they did not believe that was the reason.

Bailey was left scratching his head as well.

"I really don't know...(if it is because of) ticket prices, I'm unaware of that," he said.

While they might have finished the regular season first and second on the ladder, the first two weeks of finals have managed from a perception point of view to make that gap seem a lot larger.SOME preliminary finals shape as clashes of titans, others more like a David and Goliath affair. It's fair to say Saturday's Hawthorn-Adelaide clash falls into the latter category.
Hawthorn is now a very warm flag favourite, at the peak of its powers and with close to a full list from which to choose as it tackles the two victories still required to deliver an 11th premiership.
The Crows, in contrast, have had trouble adapting to the greater intensity of September, particularly early, and having lost first Daniel Talia and now Jared Petrenko and Sam Shaw, have some serious personnel issues.
A comfortable win to the Hawks is already being widely anticipated. A win for Adelaide would be one of the bigger upsets preliminary final weekend has seen.
HISTORY LESSON
Adelaide doesn't play at the MCG often, and when it does, not so well. The Crows' win over Melbourne three weeks ago was its first on the ground in three years and in seven attempts. Hawthorn loves the 'G, having won 10 of its past dozen outings.
The recent history between these two doesn't provide much encouragement for the visitors, either. Though they've met only once this season, just on five months ago, back in round three, Hawthorn romped home by 56 points, by some margin Adelaide's heaviest defeat this season.
The Hawks racked up 21 goals that afternoon, shared among 13 goalkickers, had an outstanding defender in Josh Gibson, and got great contributions not only from their biggest names but the likes of Liam Shiels, Matt Suckling and Luke Breust.
Adelaide stayed competitive for a time, but in echoes of its loss to Sydney in the qualifying final, continued to burn what scoring chances came its way, Kurt Tippett a main offender, and Taylor Walker held goalless.
X FACTOR
No real surprise here. It's Hawthorn dynamo Cyril Rioli who has the greatest potential to shape, or more likely, break open the game.
The super-quick Hawk with amazing reflexes and vision is a tackling machine, who this season had nearly twice as many as just about any other forward in the competition. He's the key to his side's defensive pressure and capacity to lock the ball in its scoring zone.
And as he's proved time and time again, he's a player capable of changing the course of a game with either the chasing down of an opponent in space, or creating a goal for himself or a teammate out of seemingly nothing. Rioli will do a lot more with fewer numbers than any other player on Saturday.
TACTICS
Hawthorn's modus operandi is well-known. The Hawks not only win the ball more than just about anyone, but use it much better, their army of long and precise kicks lethal by foot and able to pick their way through the tightest press or zone.
Hawthorn ranks No. 1 in the AFL for effective kicks, and its ability to patiently pick out targets in the clear is underlined by its top ranking for uncontested possessions and uncontested marks.
But the Hawks have also got their hard game back with a vengeance this year, finishing the regular season in joint first with Adelaide for wins at the clearances. Their scoring capacity is also greater with less dependence upon key targets such as Lance Franklin and Jarryd Roughead, Jack Gunston an important addition to the mix besides Breust's development and the likes of Paul Puopolo.
Adelaide has been terrific in the contested ball, but has struggled at the pointy end of the season to convert that supply into meaningful attack, ranked 17th for uncontested possession. They rely on clean and efficient delivery to key forwards Walker and Tippett, and under more pressure and opponents who have been able to clog their forward 50, have tended to bomb the ball inside 50, making scoring a laborious exercise.
Hawthorn will be doing its utmost to slow Adelaide down, close its space and enable key defender Ryan Schoenmakers plenty of time and support from the likes of Gibson to make life as difficult as possible for the Crows' key targets.
And it's when the ball rebounds from the Adelaide defence that the fun and games might start, Franklin set for a real pay day if he can find room against a back line that, without Talia and Shaw, has Ben Rutten to hold the fort, but seemingly not a lot else.
PREDICTION
This has been a wonderful year for Adelaide and its first-year coach, Brenton Sanderson, whatever happens on Saturday, the Crows climbing from 14th to the top four. But this assignment looks a bridge too far. Hawthorn is a genuine heavyweight in near peak form, virtually at full strength and on its own patch.
It would take something truly remarkable for Adelaide to stop the Hawks' juggernaut now.
Hawthorn by 36 points.
This story was found at: http://www.theage.com.au/afl/afl-news/hawks-are-adelaides-last-hurrah-20120915-25ze7.html
2012 adelaide crows afl australian football league hawthorn hawks