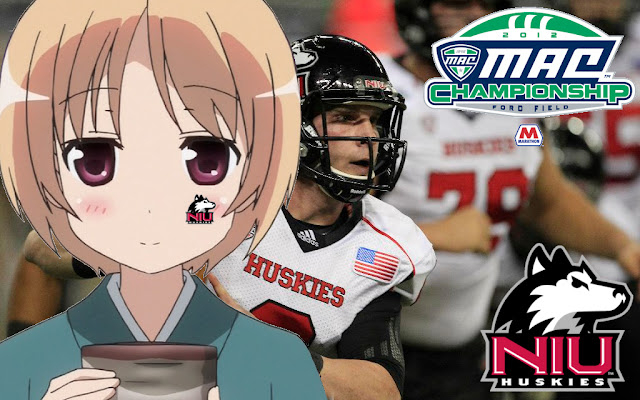 "We beat a team tonight that beat Rutgers at Rutgers. It was a great season for our conference," NIU coach Dave Doeren said. "For us to go through the entire MAC schedule undefeated and beat this team in double-overtime says a lot about our football team.

"I don't care where you play. There's a huge target on these guys' back. Because of the streaks we have, it even adds to that incentive. With all that on the line, we just keep winning."

Jordan Lynch, the MAC regular-season MVP, rushed for 160 yards and three touchdowns, including the game-winner in the second overtime. Lynch broke the NCAA record for quarterback rushing yards with 1,771, eclipsing the 1,702-yard mark Michigan's Denard Robinson set in 2010. Lynch also completed 19 of 34 passes for 212 yards with one touchdown and an interception.

Lynch played down all of the conversation about being a Heisman Trophy candidate and setting national records.

"All that stuff's great. I just feel all that stuff is for the (team) banquet," Lynch said. "I really don't want to talk about it today. It was a total team effort today. None of that (individual) stuff is possible if it wasn't for my teammates.

"I'm just so happy and proud of these guys … just happy to be MAC champion."

The Golden Flashes had their final offensive opportunity in the second overtime thwarted when Demetrius Stone intercepted Spencer Keith's fourth-down pass in the end zone.

While pollsters, selection committees and other ranked teams will determine the long shot BCS bowl fate for NIU, the players determined the outcome on the field Friday night.

NIU converted 10 of 19 third-down situations and 2 of 2 fourth downs.

"If we can get to fourth-and-short, we're going to try and go," Doeren said. "Leading the way with some beef and with Jordan following them or Akeem following them, it was a nice little package."

The Huskies' Tyler Weidel executed pooch kickoffs all night to keep the ball away from Archer, but the Golden Flashes came away with excellent field position.

"He's a great football player and it hurt us the second half … they got out to the 50 several times," Doeren said.

Doeren and Kent State coach Darrell Hazell each had predicted a close game that would come down to the final seconds.

"To their credit, they made some good adjustments at halftime and threw some slant balls on us that we didn't do a good job defending," Doeren said. "Once we got that under control, we got a lot better. Our fourth-down stop is similar to a takeaway, defensively. Any time we can do that and give the offense the ball back without losing field position is big."

With representatives from the Orange and Sugar bowls in attendance, Northern Illinois led 17-10 at the half. They led 27-13 going into the fourth quarter before Kent State scored 14 points within 15 seconds to tie the game 27-27.

When Lynch scored on a 9-yard run with 3 minutes, 12 seconds left in regulation, Kent State countered with a 19-yard pass from Keith to Tim Erjavec with 44 seconds left.

Freddy Cortez kicked his third field goal of the night from 33 yards to lift Kent State into a 37-34 lead in the first OT. But NIU's Mathew Sims came through with a clutch 40-yarder to extend the contest.

Lynch scored from 2 yards out on the next possession, setting up the Golden Flashes final, futile drive.

The Huskies appeared in the MAC title game for the third straight year, having won it last season over Ohio on a last-second field goal. Friday night's contest was every bit intriguing and represented the first MAC championship game to go into overtime.

This was the first time since 2003 that two nationally ranked teams were battling for the MAC championship.

"I was proud of our football team for keep battling back after being down 14 points. We just needed to make a couple of more plays at the end on both sides of the ball."