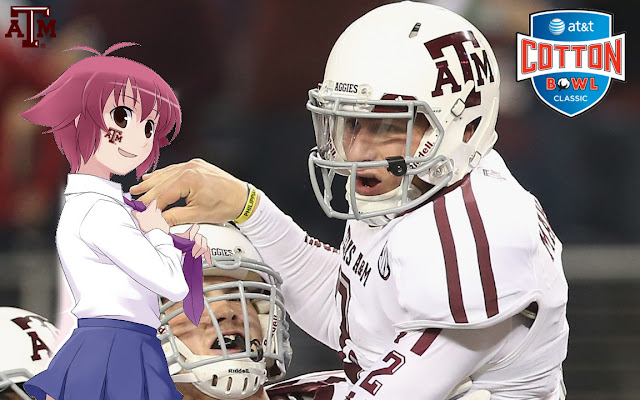 Manziel totals Cotton Bowl-record 516 yards as Aggies storm
past OU, 41-13
ARLINGTON — Johnny Manziel tiptoed the sideline for a 23-yard touchdown on Texas A&M’s first drive of the game.
The Heisman Trophy-winning quarterback known as Johnny Football and the 10th-ranked Aggies were just getting warmed up in the Cotton Bowl. There were
plenty more highlights after that nifty run.
In his first game since becoming the first freshman to win the Heisman, Manziel set a Cotton Bowl-record with 516 total yards and accounted for four TDs as the
Aggies capped their first SEC season with a 41-13 win over 12th-ranked Oklahoma on Friday night.
“There is too much talk about how you perform after the Heisman and about the layoff and all of that,” Manziel said. “There wasn’t anything holding us back. No
rust, there was no nothing. We played as a unit. … To go out and win 11 games and do what we’ve done, is impressive.”
With first-year coach Kevin Sumlin and their young star quarterback, the Aggies (11-2) fit right in with the SEC after leaving the Big 12. They broke the SEC record
with their 7.261 total yards this season (the first over 7,000 after 633 in Cowboys Stadium). They also averaged more than 40 points a game.
And they capped their debut season with an overwhelming victory in the only postseason game matching teams from those power conferences. It is the Aggies’
first 11-win season since 1998, when they won their only Big 12 title.
The chants of “S-E-C!, S-E-C!” began after Manziel’s 33-yard TD pass to Ryan Swope with 4 minutes left in the third quarter for a 34-13 lead. They got louder and
longer after that.
“To come in and go against a Big 12 rival and do everything we wanted as a team, and send these seniors out with a win, we couldn’t feel any better,” Manziel
said.
Texas A&M led by only a point at halftime, but scored on its first three drives of the second half — on drives of 91 and 89 yards before Swope’s score on a fourthand-
5 play.
Oklahoma (10-3), which like the Aggies entered the game with a five-game winning streak, went three-and-out on its first three drives after halftime.
The Aggies never trailed in their last six games. That included their win at SEC champion Alabama, which plays for the BCS national title Monday night.
SEC teams have won the last five Cotton Bowls, all against Big 12 teams, and nine out of 10. That included Texas A&M’s loss to LSU only two years ago.
Manziel set an FBS bowl record with his 229 yards rushing on 17 carries, and completed 22 of 34 passes for 287 yards.
Oklahoma, led by quarterback Landry Jones in his 50th career start, had 401 total yards as a team.
Jones completed 35 of 48 passes for 278 yards with a touchdown and an interception. He won 39 games and three bowls for the Sooners, in a career that started
on the same field in the 2009 season opener when he replaced injured Heisman winner Sam Bradford in the first college game played at Cowboys Stadium.
Already with a 24-yard gain on an earlier third down, the Aggies had third-and-9 on their opening drive when Manziel rolled to his left and took off. When he juked
around a defender and got near the sideline, he tiptoed to stay in bounds and punctuated his score with a high-step over the pylon for a quick lead.
Officials reviewed the touchdown play, but it was clear by the replay shown on the huge video screen above the Cowboys Stadium field that Manziel stayed in
bounds.
Manziel added a 5-yard TD run on a bootleg play in the second quarter, and capped the scoring with a 34-yard pass to Uzoma Nwachukwu with 9 minutes left in
the game.
The first TD run was Manziel’s school-record 20th of the season. He became only the fourth FBS quarterback with 20 TDs rushing and 20 passing in the same
season.
The other 20-20 quarterbacks were Auburn’s Cam Newton and Florida’s Tim Tebow, who like Manziel are Heisman winners from the SEC, and Nevada’s Colin
Kaepernick.
Manziel set an SEC record with 4,600 yards in the regular season, and just added to that in his 13th career game.
Oklahoma needed drives of 16 and 18 plays to get a pair of field goals by Michael Hunnicutt (23 and 24 yards). Jones threw a 6-yard TD pass to Justin Brown just
before halftime to make it 14-13.
Jones set Cotton Bowl records when he had 23 completions and 30 attempts (for 175 yards) by halftime.
Ben Malena (7 yards) and Trey Williams (30 yards) had the TD runs to cap the long scoring drives in the third quarter for the Aggies.
Manziel was picked off in the second quarter after his bootleg move and a throw that hit Malcome Kennedy in the hands in the end zone and deflected into the air.
Javon Harris grabbed the interception.
The Sooners then crossed midfield before Jones had a pass intercepted by Dustin Harris and returned to the Oklahoma 48.
That A&M drive started with a little trickery, Manziel holding the ball down in his left hand while faking a throw with his right hand. He then pitched to Kenric
McNeal, who threw a 20-yard pass to Mike Evans.
Malena then had a 23-yard run before Manziel’s bootleg run for a 5-yard TD.
Oklahoma was in the Cotton Bowl for only the second time. It was the first bowl matchup between the former Big 12 rivals, but the 17th consecutive season they
have played each other.
The Sooners had won 11 of 13 since Bob Stoops became their coach. That included a 77-0 Oklahoma win in 2003 that was the most-lopsided loss in Texas A&M
history.
Sumlin was the A&M offensive coordinator in 2002 when the Aggies upset the top-ranked Sooners. The next year, Sumlin was hired by Stoops as an assistant,
and he stayed there five seasons before going to Houston as head coach and then the Aggies.